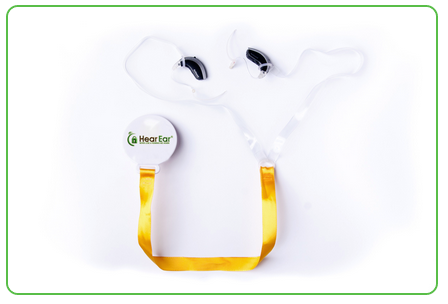 Previously known as Moreton Innovations UK (as Barbara lived in Moreton and had created an innovation), Hear Ear Audiology Limited is an exciting invention from Barbara Lawrence, a device or accessory which clips onto a hearing aid to prevent loss or damage. The idea came about after Barbara’s Mother had lost 4 hearing aids and Barbara was tired of having to keep replacing them! She constructed a number of prototypes at home using everything from dental tape to clear elastic. It was the start of her journey to begin her business; Hear Ear Audiology Ltd.

Recently retired Barbara had previously worked as an Accounts Assistant before becoming a self-employed Complementary Therapist. Prior to that as an auxiliary nurse she had damaged her back whilst lifting a patient. Barbara, in later years enrolled on courses for Complementary Therapy to learn how to help herself with her back problem. Here she gained Holistic Honours in Massage, Aromatherapy and other treatments and went on to form her own business, and became a provider for NHS patients.

As Barbara’s Mother continued to lose hearing aids, Barbara began to create a DIY invention, a Hear Ear to prevent this. She showed it to the Audiology Department and ward staff at the local hospital who suggested that she develop it because of the number of people who lose their hearing aids. This was especially prominent in hospitals, which Barbara discovered when her Mother broke her femur and was a patient at Arrowe Park Hospital for 2 weeks.

At this point Barbara decided to find out about the numbers of people who lose hearing aids and the costs involved; ‘An NHS basic hearing aid in 2014 was costing £68 plus fitting time. Hearing aids from Private Suppliers can cost many hundreds or thousands of pounds depending on the complexity of the hearing aid. I felt that it was important to let people know that they can prevent their hearing aid from being lost or damaged by wearing a Hear Ear®.’ Barbara then contacted the CCG Finance Officer and she was astounded at the cost of replacement hearing aids in one department alone. Barbara realised that if there are 211 CCGs in the UK, and if the loss of hearing aids were consistent as it was in her Wirral CCG, then the costs were in the millions.

Once Barbara had received samples from a manufacturer in China, she decided that she wanted to pursue this as a business. After registering her business bank account she was pointed in the direction of The Women’s Organisation where she met Business Advisors; Claire and Ali. Barbara began attending training courses such as Basic Bookkeeping and Understanding Tax and National Insurance, and benefited greatly from the Social Media courses and is keenly getting to grips with Twitter and LinkedIn.

As Barbara was becoming involved with The Women’s Organisation, the International Festival of Business was also going on, and Barbara went along to a number of events. ‘There I was introduced to people who gave me advice on the steps I needed to make my business a success. I continued to report back to Claire and still do so. She has been totally supportive and put me in touch with an Accountant, Patent Barrister and Patent Attorney, Solicitor and also LEP. The business venture has been daunting at times and it would have been easy to give up when I came upon obstacles but the encouragement of The Women’s Organisation has enabled me to tackle them.

At the moment Barbara is selling Hear Ear® through her website www.hearear.co.uk, contacting hearing aid suppliers, manufacturers, care homes and the NHS. Her main mission is to become a provider to the NHS Supply Chain, but there are a lot of criteria that she needs to address. Barbara says; ‘I will continue with the business because if Hear Ear® can be made available to patients when they are in hospital then lost hearing aids may become a thing of the past and nurses and carers can continue with their job of caring.’

Running her own business is going very well for Barbara, and she mostly enjoys controlling her own schedule, and the amount that she is continuing to learn. Barbara says; ‘The provision and loss of a hearing aid has an enormous impact on a person, and the loss of the device can plunge them into social exclusion and interaction with others sometimes causing depression. I feel that if I can give people a better quality of life by helping to avoid this traumatic situation, my business is worth it.’

Although she has advice for anyone who is thinking of starting their own business; ‘Research as much as possible as to the need for your product, identify its uniqueness. Find out if you have competitors, and then discover what they are doing to make their business a success. Draw on your own personal skills and those of friends and family to assist with advice and help. Your own life experience teaches you how to become flexible and how to change direction when obstacles are put in your way.

If you would like to find out more about The Women’s Organisation, the business support courses that we offer, or if we can help you grow or start your own business – then get in contact with us!